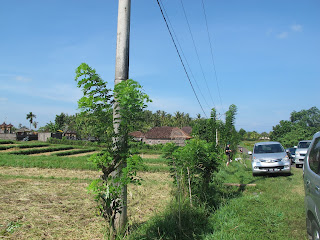 Indonesia is already affected by climate change with temperatures having risen by between 0.16 and 1.44 degrees Celsius. Drought in some places has caused uncertainty for farmers in the initial rice planting season this year. Climate change is also characterized by chaos in weather patterns in the country. Urgent task will be to take action seriously towards reduction and reversal of global warming, and avoid threats against climate action. I recently found a threat in two Indonesian articles entitled “Does climate change exist?” and “The myths of climate change” in an online platform for idea's marketplace. I am wondering what’s going on in the brains of these climate change deniers?


Denialism is a spectrum, ranging from more extreme forms of denial to more mild forms of skepticism. On the more extreme end there are vested-interest groups such the fossil fuel industry who actively seek to misinform the public and oppose government regulation on climate change, due to difference of economic interests. More generally, one factor that explaining climate denial is an individual’s ideological worldview, particularly a strong endorsement of a free-market ideology. A related construct is system justification, which refers to a tendency to rationalize and prefer existing social, economic, and political structures. Strong free-market endorsement, system justification, and political conservatism are all slightly different concepts, but what they have in common is an ideologically-motivated reason to deny climate science and resist government action. Ideologies are very inflexible type of worldviews that often cause people to filter information about the world in a way that is consistent with they already believe and make them likely to reject any information that challenges these beliefs.

There is hope for convincing ideologically driven deniers to change their beliefs. One approach is emphasizing expert consensus. In a complex and uncertain world where people are constrained by limited time and resources, we often use cognitive short-cuts, or heuristics, to help inform our decision-making. One such heuristic is expert-consensus. Consensus-heuristics condense a complex amount of information into a simple normative fact, reducing the cost of individual learning. Yet, although 97% of climate scientists agree that human-caused climate change is happening, public recognition of the overwhelming degree of scientific consensus is generally very low.

A research finds that people’s subjective perception of the level of consensus among scientists acts as a “gateway” to other key beliefs that people hold about the issue, such as the belief that climate change is happening, human-caused, and worrisome problem that requires policy support. What’s especially important is the finding that highlighting consensus seems to speak particularly well to those who are often skeptical (e.g., political conservatives). One potential reason for this finding is that changing one’s perception of what scientists’ think is a non-identity threatening belief to change. As such, it appears to be an attractive gateway to changing other personal beliefs. In short, emphasizing agreement may help reduce perceived conflict.

A psychologist explains that if we could invent one risk that bypasses all of our psychological alarm systems, climate change would be it. We have seen the projections, read the articles about record annual temperatures. We know the threat of climate change is real. But why it’s so hard for our brains to perceive climate change as a real threat and how we can motivate ourselves and others to action. There is a gap between recognizing the danger of climate change intellectually and feeling motivated to address it.

Climate change is a statistical phenomenon that cannot be experienced directly, it presents a unique challenge for the human brain. Sander van der Linden from Princeton University found that showing people long-term trends in the average global temperature simply does not carry the same weight in our decisions as the type of strong emotional reactions we form through (negative) experiences. So-called affective cues—fast and associative judgments of things we like and dislike—are formed through everyday experiences, and they help us make judgments and decisions, especially about risks. Our brains are equipped with a biologically hard-wired alarm system that motivates responses to immediate environmental threats. The problem is that because we cannot readily see, hear, or experience the risk of climate change, this affective warning system is not activated.

Moreover, our cognitive understanding of climate risks is often discounted psychologically by the fact that global warming has traditionally been conveyed as an impersonal risk that is likely to happen in other places, to other people, at some point in the distant future. But even with the emotional and cognitive alarms deactivated, there’s still another way that we often learn about risks, and that is socially, through our conversations and connections with other people we care about. Yet, if our close friends and family also don’t seem overly worried about climate change, it is likely that our social alarms will not go off either.

We need to “convince” ourselves to take climate change as seriously as we know we should. We need to learn about how climate change is already impacting their region and local community. For example, numerous studies have shown that climate change is exacerbating the drought in Nusa Tenggara, Indonesia and increasing the frequency and severity of extreme weather events around the world, such as floods and landslides. The human brain is much like a dual-core processor, which means that we learn best when abstract information is elucidated by real-word experiences. For example, although we cannot directly observe climate change, people can and do experience its impacts. What’s important, however, is that people are able to connect what they experience locally with what they already know “intellectually” about the problem.

It can also help to consider the moral components of climate change, which as the result of human decision-making is fundamentally a moral issue. The world’s poor will be disproportionately impacted by climate change, even although they contributed the least. Similarly, the choices that we make today will likely impact the quality of life of our children and grandchildren. While tons of psychological research shows that people are often intrinsically motivated to help others, if we want to convince ourself further, ask ourself this: knowing that we are all partially responsible, do we feel that we have a moral obligation to take climate change seriously?

Climate change has many types of risk, it is possible for people to worry so much about the issue that it paralyzes them. Worry is an active emotional state that often motivates people to find ways to mitigate a particular threat or problem (the adaptive response). Fear, on the other hand, often overwhelms people and can lead to inaction, denial, and other maladaptive responses. This has to do with the fact that the brain’s subcortical “fear center” (the amygdala) has more connections running to the higher-order prefrontal parts of the brain than vice versa, this is why it is often easy to be overwhelmed by fear but more difficult to consciously control it. A healthy amount of worry can motivate action.

Indonesian version of this article was published in Selasar.