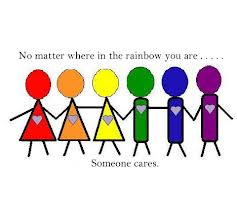 
T stands for transgendered – a broad term that includes cross-dressers, transsexuals, and people who live substantial portions of their lives as other than their birth gender. A transgendered person is someone whose gender identity and/or expression differ from conventional expectations for their physical birth sex. Gender identity refers to the internal sense of being male or female, while gender expression refers to how someone presents his or her gender to the world through style of dress, mannerisms, and so on. A transitioning transgender person is one who is modifying her or his physical characteristics and manner of expression to – in effect –satisfy the standards for membership in another gender. Transgender people can be straight, gay, lesbian or bisexual.
Q stands for questioning – someone who is questioning their sexual and/or gender orientation. Sometimes, the Q stands for “queer,” a term reclaimed by some LGBTs for political reasons.
What people in these groups all have in common is that they challenge the heterosexist norms of mainstream society and are stigmatized as a result; otherwise, the LGBTQ community is very diverse with respect to ethnic and cultural backgrounds, physical ability, religion, personality traits, socioeconomic class, and many other attributes

YOU ARE NOT ALONE

While many LGBTQ individuals do not fully understand their sexual or gender identity until adolescence later, such as in college, most grow up with an awareness that they are somehow different, and with some unclear ideas about what that difference might be. Most commonly, LGBTQs grow up in an environment that covertly, and sometimes overtly, makes them feel that they are bad people, second-class citizens, abnormal, or morally wrong. Whatever the message, these individuals can be vulnerable while questioning their identities and often do so in isolation. When they do find a way to recognize, and perhaps label their differences, it is done without the tools required to integrate this new information into their overall identity in an integrated way. Many LGBTQs feel that they must remain hidden and invisible for fear of rejection, maltreatment, and discrimination. It can be quite stressful living in a society where homophobia and heterosexism still exists on a large scale. Common mental health issues in the LGBTQ community:
For LGBTQ people, “coming out” is a complex process of understanding, accepting, and valuing one’s sexual and/or gender identity. Coming out includes both exploring one’s identity and sharing that identity with others. It also involves coping with societal responses and attitudes toward LGBTQ people. LGBTQ individuals are forced to come to terms with what it means to be different in a society that tends to assume everyone to be heterosexual and gender conforming. The coming out process is very personal. This process happens in different ways and occurs at different ages for different people. It is usually advisable to come out first to those who are most likely to be supportive. It also is important to remember that, sometimes, coming out may not be the best option (i.e., when physical safety is a concern, or if family cultural values conflict with coming out).
If you are gay, lesbian or bisexual, or think you might be, it may be helpful to keep in mind the following suggestions as you move toward self-acceptance:
Remember that coming out may be a difficult process and may require the assistance of a counselor or support group. LGBTQ people are a potential natural support system because they have all experienced at least some of the steps in the process of coming out.