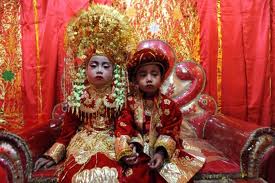 In an obscure, devoutly Muslim ethnic group in Indonesia, women are revered—and own key land and property. There is report on the world’s largest matrilineal society.

Nursyirwan Effendi is not wealthy—not in terms of money, that is. Still, in his community many people see him as blessed with good fortune. Why? “I have four daughters,” he said, beaming, on a recent summer morning. “People say I am a rich man.”

Effendi, a senior lecturer in anthropology at Andalas University in Padang, the regional capital of West Sumatra, hails from one of Indonesia’s many distinct ethnic groups, the Minangkabau. A devoutly Muslim community, their ancestral homelands are centered in West Sumatra’s lush highlands and stretch as far as the roaring seashore.

Although Islam may be known for its tendency to favor men and boys, the Minangkabau are prized among anthropologists because ownership of a family’s property—their homes, rice paddies and the like—pass from mother to daughter for generations. They are the world’s largest matrilineal society.

More remarkable, this matrilineal inheritance is cherished among the Minangkabau, who are well known within Indonesia but obscure to most westerners. And while Minangkabau women’s roles may seem conventional, their sense of equality with men and their shared power is not. When couples marry, husbands move into their wives’ homes, nearly all decisions require consensus between men and women, and, significantly, girls are treasured. On a recent trip to Indonesia, I had the opportunity to immerse myself among the Minangkabau and observe what one might even call a feminist interpretation of Islam.
“Women are the connection between the present and the past,” said Taufik Abdullah, a retired professor living in Jakarta, who is now the chairman of the Social Science Commission of the Indonesian Academy of Sciences. “If you are a Minangkabau woman and pregnant, people really hope for a girl for the first child.”

Still, the Minangkabau, who make up about 3 percent of Indonesia’s roughly 245 million people, are conservative, Abdullah said. In daily life women and men occupy roles that to Western eyes smack of inequality—women rule the domestic roost while men hold all positions of political and religious leadership. Yet both genders say that they value those roles, and each other, equally.

“Even though it seems to be that men have more functions than women, we are still the same,” said Widya Indah Lestari, a bright and articulate 16-year-old who covers her head, prays five times daily and plans to become a doctor.

Lestari and her family live in Pandai Sikek, a quiet hamlet in the highlands close to the tourist enclave of Bukittinggi. Here, the breeze is cool and crops like rice, cabbage, beans and the all-important chilies grow in abundance. (The Minangnese are known for their spicy, sumptuous cuisine.) The landscape is lushly green and hilly, with Mt. Merapi, Sumatra’s most active volcano, towering at almost 9,500 feet just to the east.

“Our tradition is based on the holy Koran,” said Lestari. “The Koran says men will be the leaders. But women are not under the pressure of men. Even though men lead women, it doesn’t mean that women are less important.”

What seems key between Minangkabau men and women is that power and authority is shared, just not in ways that are immediately obvious.

“One of the reasons I went there was to study a system where men don’t have the kind of power we are used to in the West,” said Evelyn Blackwood, an anthropology professor at Purdue University. She published a book about the Minangkabau in 2000 called Webs of Power: Women, Kin and Community in a Sumatran Village. “Yes, men have public power. But think of them as front men, representing the community to the state or to the mosque.”
“Women and men are like two sides of a coin,” said a Minangkabau professor about life her community.
Within the clan (or extended family), the power that belongs to senior men, especially those with titles like datuk (or chief), is no more significant than that of senior women, Blackwood said. Women’s ownership of land assures their power and position alongside men.
Puti Reno Raudha Thaib, a professor of agriculture at Andalas University in Padang, said that one result of this balanced system is that there is little competition between women and men. Thaib is the female head of her clan, known as the bundo kanduang. “Women and men are like two sides of a coin,” she said.
This partnership may be most obvious in the Minangkabau’s formal decision-making process, which can take place in the village hall or someone’s home. Though the datuk leads the discussion—which usually involves disputes over property, or major ceremonies—with other men, and women are seated behind them during conversation, women can and do participate. Importantly, men can’t take action without consensus from their female peers. In informal discussion—over day-to-day decisions involving household management, budgeting, and children’s education—women can lead.

In a small village called Ampek Angkek, roughly 7 km outside of Bukittinggi, an older Minangkabau couple, Rismal, 61, and his wife, Zamiarni, 58, also pondered the question of equality. Like many Indonesians, they use just one name.

They sat on mats at breakfast in their rumah gadang, or “big house,” a traditional Minangkabau home intended to hold the extended family. Made of local Surian wood, it has an arched, buffalo-horn shaped roof and walls woven of bamboo, icons of the Minangkabau building style. With its long hall-like main room, it is used not only as a residence, but also sometimes for meetings and ceremonies.
At one point, Zamiarni said that Islam puts men in a position “above” women. At that, her husband quibbled. “I don’t agree that men are above women,” he said. “It’s just the family needs a leader, so man is the leader. But in daily life, men and women are the same.”

Yet Zamiarni’s comment highlights one of the more interesting aspects of life among the Minangkabau: how they make sense of their strong Islamic religious ties—upon which they say their culture is based—and their long-held customs, or adat, as they are known.
Adat derives in part from the ancient animist and Hindu belief system of the Minangkabau, which existed before the arrival of Islam to Sumatra. When precisely the religion spread across the island and was adopted by the Minangkabau is unclear, though it probably arrived in West Sumatra around the 16th century.
It is adat that guides matrilineal inheritance, and though it seems that such a tradition might conflict with the precepts of Islam, the Minangnese insist that it does not. To accommodate both, the Minangkabau make a distinction between high and low inheritance. “High inheritance” is the property, including the home and land, which passes among women. “Low inheritance” is what a father passes to his children out of his professional earnings. This latter inheritance follows Islamic law, a complex system which dictates, in part, that sons get twice as much as daughters.
Zainuddin Husin, a former lecturer in English at Padang State University and thedatuk of his clan, said that Islam does not preclude women from inheriting. “If it was forbidden, we’d change [our custom],” he said.
Admira Salim, a professional Minangkabau woman who grew up and continues to live in Jakarta, said that the Minangnese know they are unique among Indonesia’s Muslim communities. She is proud of the difference, especially, she said, “that I do have a say in my own community.”

Although Minangkabau men and women do have a unique concept of equality, like anywhere, it is not a perfect society. Tensions can and do exist, and violence, though remarkably rare, sometimes flares.

Rezki Khainidar, 49, who describes herself as a housewife, studied medicine in university and is an activist on issues of nutrition, reproductive health and violence against women. As a volunteer with a local women’s organization in Padang, where she lives, she has learned of a few cases of verbal and physical abuse. Both the fact that women may be reluctant to report violence and that the violence is uncommon could account for the small number of cases, she said. “Everyone wants her family to look good,” said Khainidar. “It’s shameful to have a husband like that.”

Some also say they see changes afoot among the Minangkabau that may be weakening the adat system. Particularly in urban areas, they see senior male clan leaders losing authority to fathers/husbands, as nuclear families become more important than extended clans. They worry that “low inheritance” is becoming more significant than high.
Urbanization and the economy are also, they said, luring more and more young people away from rural areas, and perhaps, their traditional lives. Minangkabau young people, especially boys, have always left their village homes to gain experience and find opportunities abroad – the Minangkabau are well known as entrepreneurs as a result. Now, however, both the young men and women who leave are increasingly staying in the cities, said Abdullah of the Social Science Commission.

Yet in the highlands where the Minangkabau culture remains strongest, change seems further off.

Yulida Husni, 40, and her husband, Azwar, 37, are from Sangai Tarab, a village just outside of Batusangkar, near the former seat of the ancient Minangkabau kingdom. They live with Yulida’s mother in her home, a traditional rumah gadangpainted the color of cantaloupe. Over tea and sweet bananas, they agreed that in their community Minangkabau customs are cherished.
“The tradition is still used,” Husni said. “Everyday it is used.” Azwar added that the difference really is between the city and the country. “The city has more influences,” he said, “but they still celebrate important moments according to Minangkabau.”

In doing so, women remain central. As Husin, the datuk, put it, “We devote everything to women.”