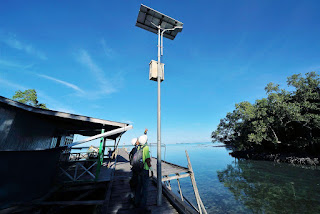 
Beside economic issues, societal acceptance topic is also important in the renewable energy transition. The energy transition includes macro-level innovations that often consist of a series of technological advancements. This is usually followed by changes in societies, their economic and social domains. Therefore, it requires social innovation.

Social innovation can function as a tool to analyze changes in social relations resulting from recent technological innovations. The technological innovation does not only affect the energy production and consumption cycles, but also the (in)direct effects on consumers and the environment. Social innovation involves all sectors of society, i.e. (combinations of) public, private, and civil society actors. Social practices and the policies are essential to determine how socio-technical transitions play out. Examples of policies that shape social practices are subsidies on solar panels and sustainable housing policies. These social practices’ policies need to be promoted within the energy transition.

Urban clean-energy transitions are not the result of a change in the technical processes of energy consumption, distribution, and production. But, that it largely depends on the combination of “how infrastructures, buildings, industries, institutions, as well as individuals and social groups, their practices and values both shape and are shaped by context-specific, conflicting energy needs, uses, forms of management, etc.” work together. Consumers are not isolated but inserted into an economic structure of interdependencies between multiple related actors. This context stimulates systemic change that surrounds consumers.

Several examples of social innovation are prosumer initiatives and energy cooperatives. A prosumer is a citizen as energy consumer that also produces energy, e.g. solar panels on one’s roof. One of such a prosumer initiative is the Smart Grid project which facilitates bi-directional energy and information flow between the utility grid and the energy consumer. It not only allows the consumer to generate energy but also to share it with other energy consumers throughout the grid. This kind of initiative is often associated with the idea of energy cooperatives. Cooperatives can manage microhydro power to foster the development of local energy communities. Multiple actors engage with the institutionalization and establishment of social innovations that support the development of decentralized energy systems.

By producing and consuming their own energy, the citizen can become active market players. Thus, by letting citizens get acquainted with this role – multiple actors have to stimulate the development from a passive to a pro-active consumer. In principle, when citizen is closely engaged with energy production, they will have a higher awareness of renewable energy sources.

Another driver looks at “transforming urban metabolisms and political ecologies”. The citizens can make coalitions with local governments and other actors, to test new technologies and services to reduce the city’s greenhouse gas emissions, maintain today’s living standards, and sustain economic growth. It gives legitimacy, openness, and accountability of the multi-level governance process.

Then, “configuring green economies” could also be driver for urban innovation systems. It pays particular attention to transformations of the production and consumption cycles of energy. This implies a focus on businesses and consumers, and their place-dependent networks, strategies, and requirements for creating a green business. Knowledge transfers and (social) innovations are facilitated through cooperation, e.g. by networks of actors with shared-values. It provides opportunity to increase wider citizen participation in social innovation.

This article was published in The Jakarta Post
Diposkan oleh Ibnu Budiman di 3:08:00 AM