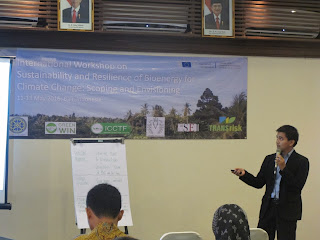 
For the bioenergy sector, the government has put two targets in place: by 2025, 30% of diesel consumption should be met by biodiesel and 25% of gasoline should come from bioethanol. But both climate and energy policies are interacting with other policies such as the National Medium Term Development Plan 2015 – 2019 which seems to place more emphasis on traditional fossil fuel developments than on renewable energies (see below, 2.2.5). Those negative interactions between policies (which were identified as a hindering factor of successful bioenergy upscaling) were also mentioned several times by the participants of an international workshop co-organised by SEI in May 2016 in Bali in the framework of the H2020 projects TRANSrisk and GreenWin. These negative interactions or conflicts may find their root in the country’s significant natural resource endowments that could be exploited for energy, as discussed in Section 2.2.2.

This report was written together with authors from Su-re.co and SEI. This is officially published as Transrisk report, funded by Horizon2020 European Comission. Find out the full version in this link > http://www.transrisk-project.eu/sites/default/files/Documents/D3_2_CaseStudy_Indonesia.pdf
Diposkan oleh Ibnu Budiman di 11:10:00 AM