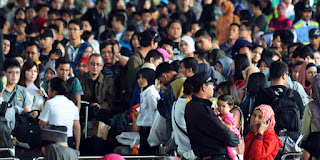 While in Jakarta, if we observe the activities during the rush hour, we will see people look like zombies. A commuter survey has revealed that 2.43 million commuters travel within, into and out of the city daily. Although Jakarta is home to 10.1 million people in the evening, the number of commuters boosts the capital’s population to 11.2 million people during the day (Central Statistics Agency, BPS-2015). Here it is, Jakarta’s Walking Dead.

In Antropology Research, another provisional settlement like mobile street traders areas, are emerged by concept of ‘user’ and ‘settler’. Settler is people who use space to sell their products (ex : street vendors), and the user is consumer of the products. However, apparently in certain ocassions, those functions could be reversed or even mixed up. For example, when a group of people often gathered in particular area and seen by hawkers, it makes hawkers come to them and producing provisional businesses. People roles in a space are provisional.

In places such as ; slum dwellers, cadgers area, and illegal parking lot, each place has their own informal security which has no rule on their operation. If we do research without permission on its places, we could be kicked out eventhough it is not their land. Because in that time, they have provisional power on the land. Dealing with them needs particular strategy.

I ever had talks with an ojek (motorcycle taxi) driver. I interviewed him for research purpose and gave him money subsequently as reward of his time. A week later, he accused me suddenly as his competitor. Then I explained to him that I am not, finally he apologized and said that he was provoked by his friends. Provisional prejudice frequently emerges from urban people.

From above facts, I can imagine how complicated to manage Jakarta properly. Deciding urban planning for a megacity is a huge homework for the govt. It is a big challenge. When they create the plan, they have to deal with many stakeholders from businesses, political elites, and NGOs. Furthermore, they must match it with national planning. That is a long way process which is often to be shortened then it releases incorrect result.

The result then is applied. In executing actions, it is used to meet with many unexpected occurences which are influenced by corrupt officials. Some officers trap in sense of humanity when they ought to enforce the law. Thus they let the poor break the urban planning. The number of that poor increases gradually due to urbanization. Slum areas are created by govt itself. They ask the poor to build provisional houses in provisional land. Here is nepotism plays its role.

Eventually, there is changing on the urban plan immediately. Jakarta likewise has provisional planning. That is a poor idea for the city. It is a provisional life in a provisional city. There is no permanent, there is only the provisional.

People is key problem, as Rick said. They serve as urban antagonists. Jakarta is overrun by space-eating zombies.